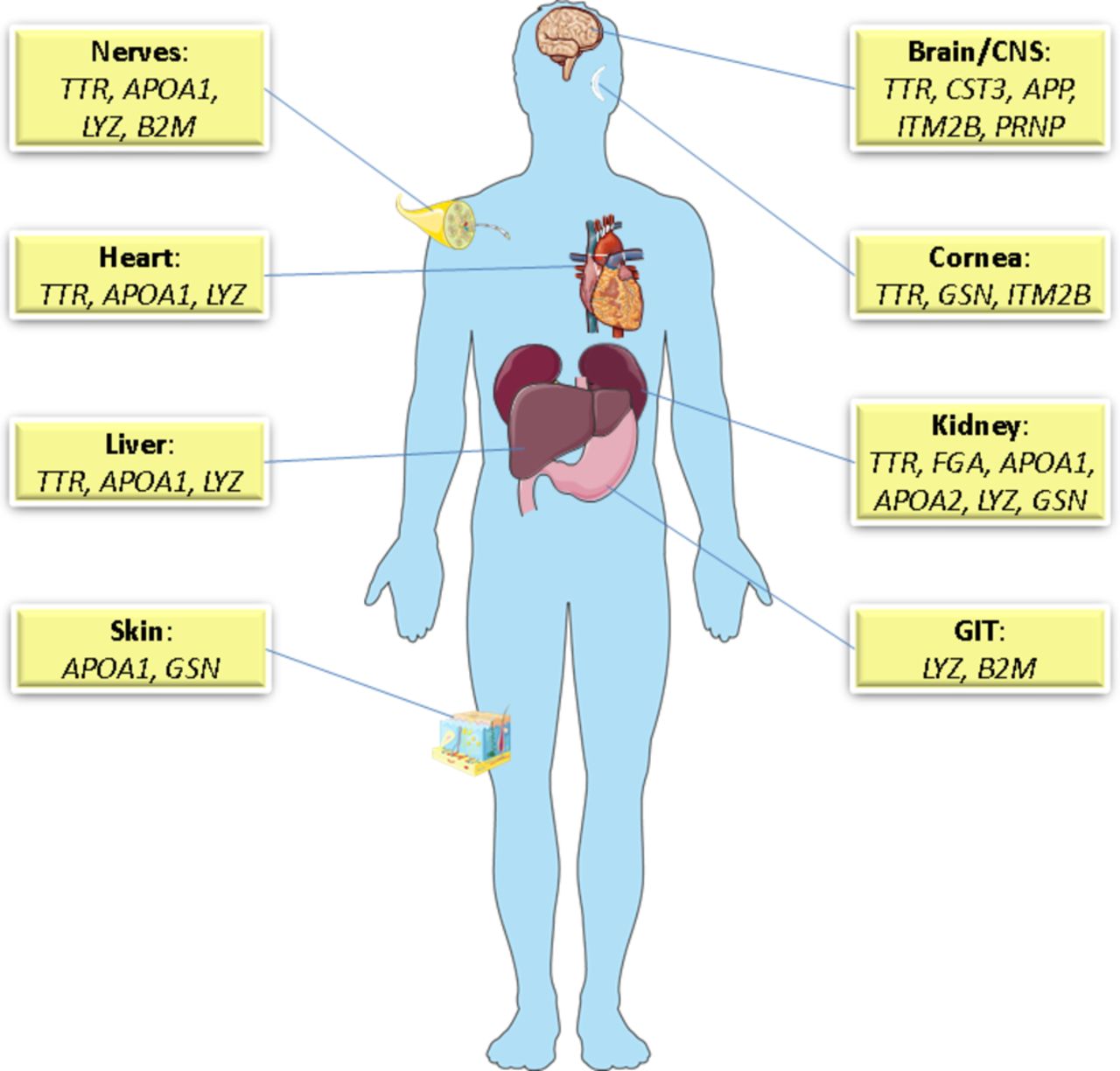 Amyloidosis (am-uh-loi-DO-sis) is not just one type of disease but instead, are a series of diseases in which there is extracellular deposition of a protein type which, although it may be derived from different and unrelated sources, all misfolds into what is scientifically known as beta pleated sheet, Khan & Falk (2001). The one thing that this type of diseases have in common are the extracellular deposition of pathologic, insoluble fibrils in various tissues and organs. Researchers working on treatment medication try to identify the source of the precursor protein so that treatment is aimed at eliminating or reducing the extent of deposition and is tailored for each patient depending on the type of amyloidosis they have.

The type of protein and where it collects tells the type of amyloidosis a person has. Amyloid deposits may collect throughout the body (refer to diagram) or in just one area. The different types of amyloidosis include:

AL amyloidosis (immunoglobulin light chain amyloidosis). This is the most common type and used to be called primary amyloidosis. AL stands for “amyloid light chains,” which is the type of protein responsible for the condition. There’s no known cause, but it happens when your bone marrow makes abnormal antibodies that can’t be broken down. It’s linked with a blood cancer called multiple myeloma. It can affect your kidneys, heart, liver, intestines, and nerves.

AA amyloidosis. Previously known as secondary amyloidosis, this condition is the result of another chronic infectious or inflammatory disease such as rheumatoid arthritis, Crohn’s disease, or ulcerative colitis. It mostly affects your kidneys, but it can also upset your digestive tract, liver, and heart. AA means the amyloid type A protein causes this type.

Dialysis-related amyloidosis (DRA). This is more common in older adults and people who have been on dialysis for more than 5 years. This form of amyloidosis is caused by deposits of beta-2 microglobulin that build up in the blood. Deposits can build up in many different tissues, but it most commonly affects bones, joints, and tendons.

Familial, or hereditary, amyloidosis. This is a rare form passed down through families. It often affects the liver, nerves, heart, and kidneys. Many genetic defects are linked to a higher chance of amyloid disease. For example, an abnormal protein like transthyretin (TTR) can be the cause.

Age-related (senile) systemic amyloidosis or Wild Type. This is caused by deposits of normal TTR in the heart and other tissues. It happens most commonly in older men.

Organ-specific amyloidosis. This causes deposits of amyloid protein in single organs, including the skin (cutaneous amyloidosis).

As a side note, with the decline in death resulting from infectious diseases due to improvements in sanitation and hygiene as well as the development of effective vaccines and antibiotics, life expectancy in most highly developed countries is now ∼80 years compared with ∼50 years a century ago (Riley 2005).  As wonderful as this sounds, on the flip side there have been a dramatic increase in the last few decades of another group of medical conditions, collectively called “protein misfolding disorders,” that include Alzheimer’s disease (AD) and type 2 diabetes (Knowles et al. 2014). It is now known that approximately 50 human diseases in addition to AD are associated with similar deposits (Chiti and Dobson 2006), including other neurodegenerative conditions such as Parkinson’s disease (PD), Huntington’s disease (HD), motor neuron disease (MND), also known as amyotrophic lateral sclerosis (ALS), and the transmissible prion disorders such as Creutzfeldt–Jakob disease (CJD).  Amyloidosis of course falls under the “protein misfolding disorder” category. The amyloid state of a protein molecule (except in the rare cases where this form of proteins has a functional role) becomes intrinsically misfolded and so is inherently prone to interact inappropriately within the crowded and complex environment of a living system, thereby generating toxicity (Bucciantini et al. 2002).

The need for a straightforward diagnostic system is vital but particularly important for hereditary amyloidosis hATTR where the mutation in one of the seven genes (transthyretin TTR, fibrinogen alpha FGA, apolipoprotein A1 APOA1, apolipoprotein A2 APOA2, lysozyme LYZ, gelsolin GSN or cystatin C CST3) leads to formation of misfolded TTR or amyloid that deposits in multiple organs such as the heart, liver, gastrointestinal tract, kidneys or nervous system. Having a direct way of testing a patient would enable early diagnosis (while avoiding misdiagnosis) that exponentially increase the survival rate of the patient. Otherwise amyloidosis would continue to be an ill defined entity and as a result, many more will die.

Amyloid; A Lesson in History

The term “amyloid” was first popularised in medical literature by a German pathologist, Rudolph Virchow, in 1854 when he introduced the term to denote a macroscopic tissue abnormality that exhibited a positive iodine staining reaction. Prior to Virchow’s usage of the word, the term was actually brought in the scientific literature by the German botanist Matthias Schleiden (1804 – 1881) who mentioned “amyloid” for starch, referring to“starch-like”. The word itself stems from the latin word “amylym” (for starch). This starch or amyloid is coloured blue by iodine, and the combination is soluble in water, giving it a golden-yellow colour. It is well possible that amyloid deposits have been described even earlier in the reports on human autopsy cases with homogenous material in liver or spleen tissue (Kyle 2001) probably representing amyloid. The first observation stems from the year 1639, described by Nicolaus Fontanus.
By the end of the 1800s, progress in the staining methods to detect amyloid continued on with new insights such as the biochemical character of amyloid presented in 1859 by prominent German chemist August Kekulé (1829 – 1896) and in 1875 three scientists; the French pathologist and histologist Victor Cornil (1837 – 1908) in Paris, the Austrian anatomist Richard Heschl (1824 – 1881) in Vienna and Rudolf Jürgens in Berlin described independently the usefulness of methylviolet stain to detect amyloid. Eventually this methylviolet stain was replaced by the currently used, Congo red, introduced by Belgian Physician Paul Divry . Congo red dye itself was invented by the German chemist Paul Böttiger in 1884.

Amyloidosis; Where Did It Come From

Portuguese-type amyloidosis (transthyretin amyloidosis, ATTR V30M) is the most common form of systemic hereditary amyloidosis and the first case was autopsied in Portugal in 1938 but was only properly entitled ‘amyloidosis’ in 1943 by Friedrich Wohlwill. Corino M. Andrade in 1951/1952 reported his clinical observations of people having a ‘peculiar form of peripheral neuropathy’ in a fishing village of Póvoa de Varzi in the Oporto district of Portugal. Andrade (1969) performed a genetic study using 623 participants from 148 sibships and results showed an autosomal dominant mode of inheritance in each of them. It seems likely that the disease in the families all originated from a single mutation.

A variation of the Portuguese strain has been reported in Germany (Delank et al, 1965) with one patient whose bone marrow was cultured displayed an extra chromosome (the significance of this is uncertain). Other stain that resemble the Portuguese type have also been found in Greek families in the United States, Poland, Malaysia (family originally from Sri Lanka), China and India.

In Japan, Araki et al (1969) reported a huge percentage of family members from the Kyushu area in Japan had displayed the peripheral neuropathy not unlike the ones in Portugal. Interestingly enough, it is in the particular Kyushu area that the Portuguese had first set up a trading post in 1549. However, no Portuguese ancestry could be traced in this affected family. Araki went on to discover several other families with the disease around the country.

Other cases that involved amyloid neuropathy but with features different from the other strains mentioned were found in patients in Donegal county in Ireland, patients in Scandinavia (Andersson, 1970), patients in England, a family in Maryland, Iowa (although the family originated from the British Isles) and patients in North Africa. The disorder has also been found in Italian families, Swiss, Israeli Sephardic Jews, Russian Jews, Armenians, Arabs, Turks and one case in Hong Kong.

In conclusion, the understanding and treatment of hereditary amyloidosis diseases are still ongoing although the future seems promising. As long as education continues and more people learn about the epidemiology and ministrations of the disease, there would be less fear and misunderstanding. Earlier on before recognition and proper diagnosis was conducted, patients were assailed with accusation that they were experiencing a curse upon the family or in some cases were misdiagnosed as having sexual transmitted disease which brought shame upon the family and many suffered in silence because of this stigma.